Manchester United haven’t had the best luck in the transfer market since Sir Alex Ferguson retired in 2013.

Of course, the Scot made a few dud signings himself, as anyone would after close to 30 years in the job, but their record since his departure has been truly horrendous.

We’ve put together an XI of the very worst post-Fergie Man Utd signings, with Alexis Sanchez’s reportedly imminent departure (according to the Mail) inspiring us.

The Chile international is joined by a host of others who arrived with big expectations and failed to deliver, though he’s arguably the worst of the lot in that respect.

Still, plenty who didn’t make our line up below would also have been worthy inclusions, so here’s a little shout out to Memphis Depay, Daley Blind, Eric Bailly, and Fred – who were just not quite as bad as this lot below: 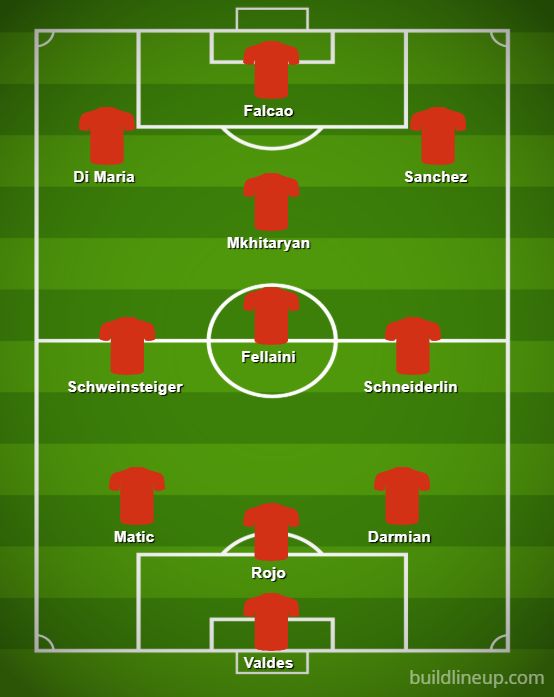 Not exactly bad because of what he did on the pitch, but just a bizarre signing in general. Played only two games for United after arriving as a free agent following a lengthy injury layoff. Pointless.

An injury-prone and not-very-good defender still on the club’s books, Marcos Rojo is a name most Red Devils fans would gladly forget quickly.

Same goes for Matteo Darmian, who is seemingly destined to sit around at Old Trafford for the rest of eternity as perpetual links with a loan move to Juventus or Inter Milan fail time and time again to materialise.

We’ve been a bit cheeky and put Nemanja Matic in defence, but then that’s not as bad as when Jose Mourinho did it. A fine midfielder for Chelsea once upon a time, but arrived too late in his career and has looked slow, sluggish and generally poor for all but four or five games he’s played for Man Utd.

A bit of a cult hero now, and a player who you cannot deny always gave his best, but Marouane Fellaini was for so long a symbol of where it all went wrong for United post-Fergie. The Belgian was the first signing by David Moyes, and, like his former Everton manager, he was never really meant to elevated to that level.

One of many players who just seemed cursed by walking through the gates of Old Trafford. Morgan Schneiderlin was superb at previous club Southampton, but quickly looked all wrong in United’s midfield and didn’t last long. Now a forgotten man struggling for games at Everton.

A nice guy who never complained about not playing for a large chunk of his short spell at United, Bastian Schweinsteiger has done well to remain popular with the club’s fans despite doing very little as a MUFC player.

The wrong player playing under the wrong manager, Henrikh Mkhitaryan was a bizarre addition made in Jose Mourinho’s first season in charge. The Armenian never looked suited to the Portuguese’s style of play, and as such, failed to get into the team for a long time. Aside from a few flashes of quality, he really struggled with the Red Devils and has gone on to be just as bad, if not worse, since his move to Arsenal, which, in a rather fitting end to a terrible United career, was key in bringing Sanchez to the club.

With just five goals in 45 games, Sanchez suffered the same fate as the likes of Schneiderlin and Mkhitaryan, walking through the door at Man Utd and having his powers instantly sapped away. The Chilean has looked nothing like the world beater he was at Arsenal and a sale now makes sense for him after a dire year and a half in Manchester, though it’s a bit of a mystery as to why Inter Milan looked at Lukaku and Sanchez linking up at United and thought they’d get themselves a piece of that.

Signed from Real Madrid when he was at the peak of his powers, Angel Di Maria got off to a decent start at MUFC before his form rapidly nose-dived. The Argentine looked the wrong fit under the notoriously difficult Louis van Gaal, and lasted just a season before leaving for Paris Saint-Germain.

The striker who made Romelu Lukaku look like Pele, Radamel Falcao had an absolutely shocking single season on loan at United in 2014/15. With just four goals in 29 games, the Colombian somehow did enough to persuade Chelsea to gamble on him on loan a year later. He was even worse at Stamford Bridge, scoring only one goal in 12 appearances before returning to parent club Monaco with his tail between his legs. He’s since done well to get back to his best, however, firing Monaco to the 2016/17 Ligue 1 title and generally looking the world class finisher he’s been for most of his career, save for those awful two years in England.