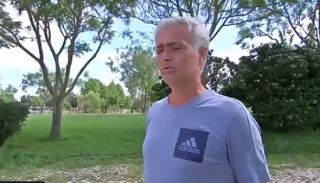 Former Manchester United and Chelsea manager Jose Mourinho is clearly missing life in football after a long spell out of the game.

Watch the video below as the Portuguese tactician looks close to tears as he admits he’s struggling to enjoy having a break from management.

José Mourinho tears up while saying he misses football. pic.twitter.com/uPhdVGH7SG

It’s sad to see Mourinho this way, even if he’s not always endeared himself to neutral fans with some of his antics.

He was sacked by Man Utd in December after a dreadful start to last season, and some have questioned if he’s still the world class coach he was a few years ago.