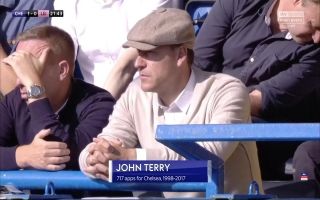 Terry was spotted by Sky Sports’ cameras, the current Aston Villa assistant manager is sporting a flat cap that resembles the kind that were made famous by hit show ‘Peaky Blinders’.

It’s great to see that Terry always has time in his busy schedule to support a teammate and the Blues, the retired defender achieved everything with the Stamford Bridge outfit during his illustrious playing career.

Check out Terry in the stands below:

Here’s some reaction to Terry being in attendance at today’s clash:

Our good luck charm and our very own legend ???

JT what a legend of the club, your best memories are still with us as a @ChelseaFC thanks for using your heart ? and soul to play for the club.

It has turned out to be real day for the family this afternoon:

Frank Lampard senior, Harry Redknapp and John Terry in the house for this. #CFC #CHELEI

Lampard’s cousin and Harry Redknapp’s son – Jamie, is also at the game, although he’s in the studio covering the encounter for Sky Sports.