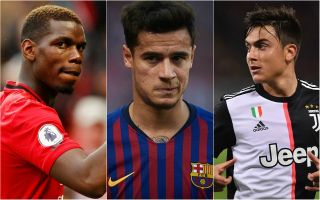 The transfer window may be closed for Premier League clubs, but the rest of Europe remains in business for a little while longer.

There’s also nothing stopping English clubs selling some big names, even if, for the most part, it doesn’t make much sense for them to do so as they couldn’t replace them until January.

Still, there’s plenty of gossip continuing to do the rounds, and we’ve highlighted ten major potential deals to look out for for the rest of this summer…

While it seems unthinkable that Manchester United would let Paul Pogba go now that the transfer deadline has come and gone for English clubs, transfer links with Real Madrid just won’t die down.

Paul Pogba continues to be linked with Real Madrid

According to the Times, the Spanish giants seem to be preparing one final push to land the France international, who has not had the most convincing time at Old Trafford.

Still, allowing Pogba to leave now seems a huge risk given United failed to sign a central midfielder this summer and could not do so again for five months.

Another Man Utd player heading for the exit seems to be Alexis Sanchez – a far more likely departure than Pogba, one would imagine.

As seen in the tweet below, Gianluca Di Marzio claims the Red Devils flop has an agreement to join Inter Milan, where he could once again link up with Romelu Lukaku.

MUFC would surely love to offload the hugely disappointing Sanchez while they still can, so fans will be hoping to see this deal go through as soon as possible.

Long linked with a return to Barcelona, it’s even been claimed by Guillem Balague on BBC Sport that the Paris Saint-Germain superstar could take a pay cut to seal his move back to the Nou Camp.

Whatever happens, it’s hard to imagine Neymar will still be a PSG player next month, with the Brazil international not living up to expectations in the French capital in his two years at the club.

Don Balon have also linked Neymar with Juventus, and either of these moves would be one of the stories of the summer as the 27-year-old remains one of the biggest names in world football.

With just a year remaining on his contract, the end of the Premier League transfer window doesn’t look likely to give Tottenham fans too many assurances over the future of Christian Eriksen.

The Denmark international would be a quality signing for most top clubs and the Sun continue to link him with Real Madrid as they try to put pressure on Spurs into doing a late deal.

Given Eriksen’s contract situation, it seems likely he could move for a very generous price this summer as Spurs won’t want to lose him on a free in a year’s time.

Paulo Dybala could be set for a transfer away from Juventus

After a dip in form last season, Paulo Dybala no longer looks guaranteed a key role at current club Juventus and could be another late mover this summer.

Diario Gol have linked him with Real Madrid as a possible cheap alternative to Neymar, in what could be a smart piece of business if they manage to get the Argentine back to his best.

Don Balon, meanwhile, have also linked him with PSG as part of the aforementioned potential swap deal for Neymar.