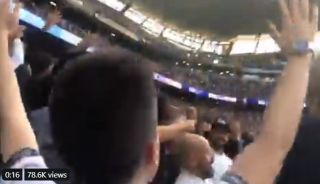 Tottenham fans must be loving the addition of VAR to the game as it’s given them two huge helping hands in recent games against Manchester City.

Spurs notably knocked Pep Guardiola’s side out of the Champions League last season thanks to a late Raheem Sterling goal being chalked off in the second leg of their Champions League quarter-final.

And yesterday, Tottenham escaped with a 2-2 draw in their Premier League clash at City thanks to Gabriel Jesus being denied what looked like a last-gap winner.

There’s been plenty of debate about some of the new rules and whether VAR is in keeping with the spirit of the game, but this lot in the video below clearly don’t care!