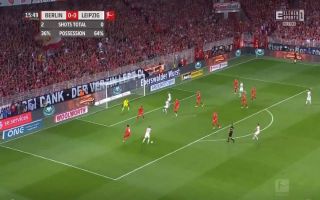 The issue of ownership in the Bundesliga is a big one for fans, many don’t agree with the way Red Bull got involved with Leipzig as they bought the rights to a fifth tier team and helped them rise through the divisions.

To protest this, Get German Football News tweeted to confirm that Union Berlin fans would be staying silent for the first 15 minutes of their game against Leipzig today:

So far so good, however this backfired spectacularly as the Berlin fans broke out with loud signing after the 15 minutes were up – only for Leipzig to score seconds afterwards:

This video captured the moment when the fans started to sing again but they were disapointed less than a minute later:

Union Berlin fans end their boycott against Leipzig and announce they’re in the Bundesliga. pic.twitter.com/OZGHz57rj8

Things got even worse for the newly promoted side as Leipzig scored two more to make it 3-0 at half time.