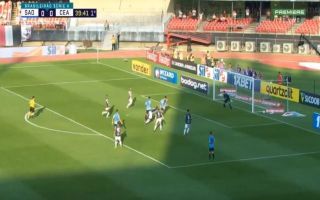 Dani Alves is legendary in World football for owning the entire right side of the pitch on his own and his relentless attacking instincts.

At the age of 36 you might think he returned to Brazil to wind down and take one last big payday before retirement. Think again as he shows he’s still looking to get forward and scored a smartly taken goal in his return.

The BBC confirmed his return to Brazil with Sao Paulo earlier in the summer.

His goal put his new team in front as a fantastic first touch takes the last defender out of the game and he slots the ball away with the composure of a centre forward.

If he continues to play like this then he should be a big hit back in his home country and it will be worth keeping an eye on his performances to see if he produces any more magic moments.