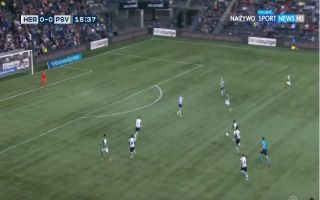 Man United were linked with a lot of forwards this summer and that will probably continue following the departure of Lukaku and the future of Alexis Sanchez still looking unclear.

One of those players linked was PSV star Steven Bergwijn however The Sun reported the winger had signed a big new deal to stay at PSV.

He’s repaid PSV’s faith immediately by scoring a stunning goal for them tonight to open the scoring against Heracles.

He spins brilliantly just over the halfway line and drives forward before finding the bottom corner from distance.

Last season was his best one yet for PSV as he managed to reach double figures for goals by scoring 15 in all competitons.

If he keeps this form up then he could be on the move soon despite the new deal.