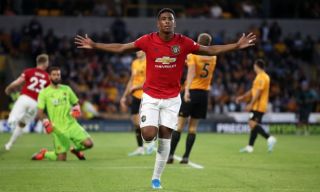 Anthony Martial was on the scoresheet for Man Utd in their clash with Wolves on Monday night, giving his side the lead in the first half at Molineux.

With Romelu Lukaku securing a move to Inter this summer, coupled with Alexis Sanchez’s ongoing absence, the responsibility of scoring goals for Ole Gunnar Solskjaer’s side has fallen largely on the shoulders of Martial and Marcus Rashford.

Following the win over Chelsea last weekend, the response to that level of pressure has been impressive to date from the pair, with the Frenchman finding the back of the net with a superb finish on Monday night, as seen in the video below.

It also brought up a personal milestone for the 23-year-old, as it was his 50th goal for Man Utd across all competitions, and he becomes only the 53rd player to reach that landmark for the Red Devils.

In turn, it’s a relatively exclusive club and given he still has years ahead of him, he’ll hope that there will be many more goals to come.

Time will tell whether or not it will prove to be the winner for United in what is a tricky encounter for them, but Solskjaer will be pleased with what he saw in the opening 45 minutes as his side largely contained Wolves and looked a threat at times themselves before breaking the deadlock.

?? Anthony Martial becomes the 53rd player to score 50 goals for Man Utd in all competitions. He has now scored 12 goals in his last 18 PL starts pic.twitter.com/V145izRLtJ