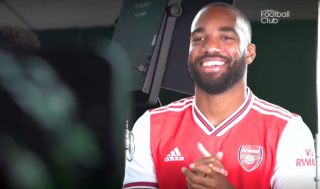 Arsenal striker Alexandre Lacazette has sent an exciting message to fans by claiming the Premier League has not yet seen the best of him.

The Frenchman was a little slow to get going in his first season at the Emirates Stadium, but looked a lot better last term when Unai Emery replaced Arsene Wenger as manager.

Speaking about his performances in his time in England, Lacazette feels the Premier League has not yet seen his best form, but suggested there’s more to come as he says he’s motivated to get back into the French national team.

‘The Premier League has seen a very good Lacazette, but not yet the best Lacazette,’ he told Canal Plus in the video clip above.

‘I need to score more goals I know, I need to be more consistent and consistent throughout matches. I can do better.

‘I am continuing to work, the national team coach makes his decisions. I am trying to put in the work. There you have it. I am still (motivated for it).’