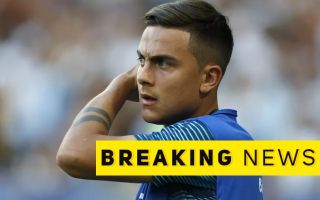 Paris Saint-Germain and Juventus are reportedly set to hold talks over the potential £73million transfer of Paulo Dybala this week.

According to the Daily Mail, the Argentina international’s asking price could go as high as around £91m, though it seems there is a desire from both clubs for this move to go through.

The Mail claim PSG are desperate to land a big name this summer, while Juventus are keen to sell Dybala and replace him with Inter Milan striker Mauro Icardi.

Manchester United were notably in for Dybala earlier in the summer, with the Mail noting that he’s said to have turned down a move to Old Trafford.

The Red Devils could probably have done with one more signing in attack, with Ole Gunnar Solskjaer now set to rely heavily on two young forwards in Marcus Rashford and Anthony Martial this season.

Paulo Dybala could seal a transfer from Juventus to PSG

Dybala is also a top talent on his day and it would have been great even from a neutral perspective to see him in the Premier League at some point.

A move to PSG this summer, however, makes that prospect less likely for the foreseeable future.