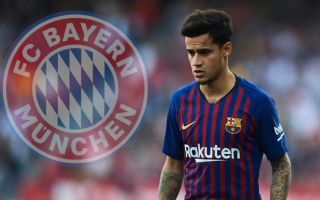 Barcelona officially confirmed Philippe Coutinho’s move to Bayern Munich today, as the Brazilian looks to reignite his career with a stint in Germany.

As per the club’s official site, Coutinho has sealed a season-long loan move to Bayern now, with the Blaugrana set to receive a fee of €8.5M from this deal.

Bayern are also set to pay all of the Brazilian’s wages for the season ahead, with the Bundesliga outfit also having the option to make Coutinho’s move permanent for €120M next summer.

This deal seems like a good one for all parties, as Barca get the player off their books for the next 12 months or so, Bayern get their hands on a quality midfield option, whilst Coutinho gets the chance to prove himself at another top club.

Given how much they already spend on wages, it’s was somewhat vital that Barcelona got Coutinho off the wage bill for the season ahead, as they seemingly look to balance the books ahead of next month’s transfer deadline.

Overall, according to journalist Alfredo Martinez, loaning Coutinho to Bayern is set to save the club more than €40M given the loan fee they’ve received from the deal combined with the German side covering his wages.

We’re sure a lot of Barca fans will be keeping a keen eye on Coutinho’s performances during the remainder of this season in order to try and determine whether the German side are going to be tempted into buying him permanently next summer.

And for the club’s financial state, we can bet the Blaugrana will be hoping to see them buy Coutinho in 12 months time as well!