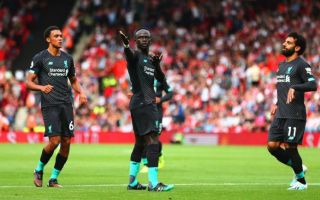 Pundit Garth Crooks has fired a warning to Liverpool manager Jurgen Klopp about not over-playing Sadio Mane after his terrific performance in the weekend win over Southampton.

The Senegal international has not had much of a pre-season with the Reds due to his involvement in the Africa Cup of Nations over the summer, but has returned to club football with a bang.

Mane scored twice in the Super Cup win over Chelsea in midweek and then netted a beautiful solo effort to give Liverpool the lead in what had been a close game away to Southampton.

Having raised his game a lot last season, it looks like Mane is not slowing down, and Crooks was surprised by his fitness and form as he stood out against the Saints and made his team of the weekend on BBC Sport.

Still, Crooks also advised some caution to Klopp over his use of the 27-year-old, urging him not to over-play him and risk an injury, which perhaps seems more likely for the player given his lack of a real break over the summer.

That said, Mane is such an important player for LFC, it’s hard to imagine Klopp will find that many opportunities to rest him throughout the season.

“The Senegal international was on top of his game again after a hectic summer of football in the Africa Cup of Nations,” Crooks said.

“While there has been talk of Mane not getting sufficient time off to recuperate from the tournament, he looked sharper and fitter than anyone else on the field against Southampton.

“Jurgen Klopp needs to be very careful not to overplay Mane. If he does and loses the player through injury, he could live to regret it.”