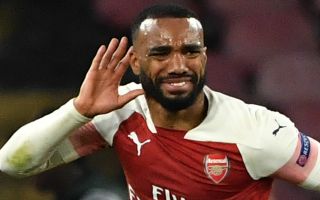 Alexandre Lacazette has taken to Instagram to have his say on Sean Dyche’s words about ‘diving’ in football, claims which were made following Burnley’s 2-1 defeat to the Gunners on Saturday.

Unai Emery’s side beat the Clarets 2-1 at the Emirates last week thanks to goals from Aubameyang and Lacazette, however it seems Dyche wasn’t too focused on talking about the game during his post-match press conference.

As per the Mirror, when speaking to BT Sport after the game, Dyche stated “I’m really worried about the game of football. The people falling on the floor and diving all over the place today – it’s got to go.”

And following this, Lacazette has somewhat responded to these words from Dyche, with the Frenchman replying to a video of the Burnley boss saying these words on Instagram with three ‘laughing’ emojis.

Seems like Lacazette certainly doesn’t agree with Dyche on this one!