BBC pundit Garth Crooks has named his Premier League team of the week for this weekend’s fixtures, and it’s been dominated by a number of players from the league’s top six clubs.

As seen in the picture below, and in this article from the BBC, five of the 11 players featured are from Arsenal, Liverpool and Man City, with stars from Everton, Leicester, Norwich and Sheffield United also bagging a place in Crook’s team.

Both Matip and Mane from Liverpool feature following their impressive displays vs Southampton, whilst Arsenal’s Ceballos and Aubameyang have both been chosen by Crooks given their displays against Sean Dyche’s Burnley on Saturday afternoon. 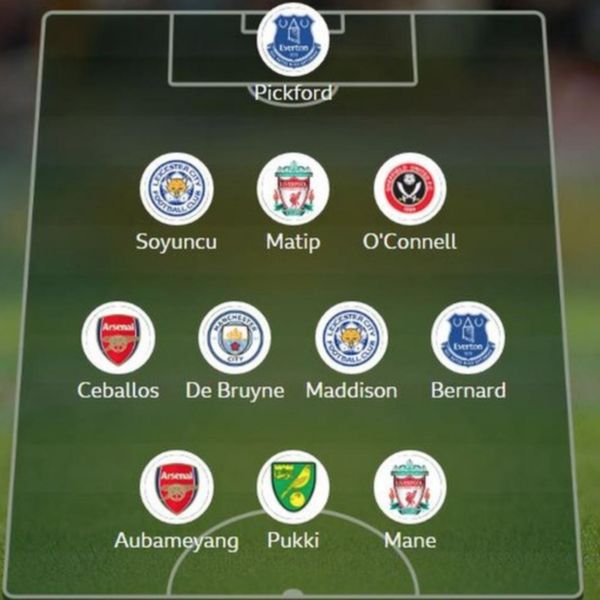 Mane, Matip and Ceballos have claimed a place in Crooks’ TOTW

Kevin De Bruyne’s two assists against Spurs has also seen him selected by Crooks, whilst Leicester’s Caglar Soyuncu and James Maddison have also made the cut after they helped the Foxes come away from Stamford Bridge with a point on Sunday.

Bernard’s solo goal against Watford has earned him his place, whilst Teemu Pukki’s hat-trick for Norwich in what was just his second PL game means he’s been given the nod by Crooks.

Jordan Pickford has been selected between the sticks in Crooks’ side following his clean sheet against the Hornets at Goodison Park on Saturday.

Sheffield United defender Jack O’Connell completes Crooks’ XI on what was a brilliant weekend for the Blades, who bagged their first win in England’s top flight for just over 12 years following their 1-0 win over Crystal Palace.

Agree, or disagree, with any of Crooks’ picks in his ‘Team of the Week’ here? Let us know down below.

Personally, we’d have had Lacazette over Aubameyang given his overall performance against Burnley, but that’s just us!