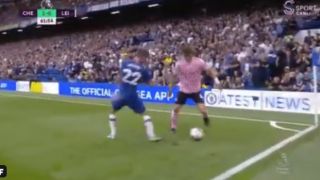 Leicester City defender Caglar Soyuncu looks like a very capable replacement for Harry Maguire after this moment of brilliance against Chelsea.

The young Turkey international did not immediately become a regular at Leicester last season, but has made a strong start to the new campaign, performing well in Sunday’s 1-1 draw away to Chelsea.

One of his most eye-catching moments was this sublime skill in the video above, as he sends Chelsea new-boy Christian Pulisic the wrong way with remarkable skill and composure to play out from the back.

If the 23-year-old carries on like this, Leicester have got themselves another top quality centre-back in the making after losing Maguire to Manchester United this summer.