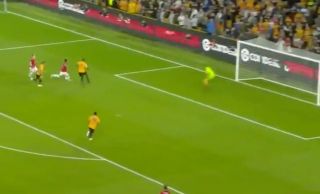 Man Utd drew first blood in their clash with Wolves on Monday night, with Anthony Martial breaking the deadlock for the visitors at Molineux.

It came after some patient build-up play and a perfectly weighted through ball from Marcus Rashford, as seen in the video below, before the Frenchman produced a stunning finish to find the back of the net.

Ole Gunnar Solskjaer’s men don’t have fond memories of Molineux after suffering two defeats there last season, and so they would have been concerned heading into the fixture as they look to make it back-to-back wins to start the new Premier League campaign.

The first goal could prove to be crucial as it may well force Wolves to come out and play more, leaving gaps in behind for the pace and movement of United’s attackers to exploit.

Time will tell if that happens, but Martial will be delighted with this finish and after giving his side a potentially crucial lead…

TOMY MARTIAL CAME FROM FRANCE. ENGLISH PRESS SAID HE HAD NO CHANCE pic.twitter.com/CTajMonvax