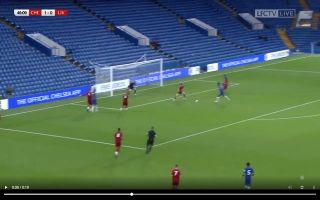 Michy Batshuayi is on fire for Chelsea’s Under-23s tonight, the Belgian has made it 2-0 to the Blues with a fine finish against Liverpool.

In the 47th minute of the clash Batshuayi scored his second of the night to extend Chelsea’s lead, the ace’s strike came just seven minutes after his lovely opener following a pinpoint pass from Antonio Rudiger.

Chelsea ace  Juan Familio-Castillo put in some lovely work on the left-wing before playing the ball into Faustino Anjorin who perfectly teed up Batshuayi.

The Belgian steadied himself before firing the ball into the roof of the net.

Check out Batshuayi’s second of the night below:

he’s at it again! @mbatshuayi grabs a second to make it 2-0 vs Liverpool. #CFCDev pic.twitter.com/FcMHxRXb32

With Batshuayi working his way towards full fitness for Chelsea’s reserves side tonight, Frank Lampard has been handed a major boost as he looks to find the man to lead the line for the Blues this season.

Batshuayi certainly deserves a chance to prove himself as Chelsea’s main striker ahead of Olivier Giroud and Tammy Abraham, could the 25-year-old finally come good for the Blues this season?