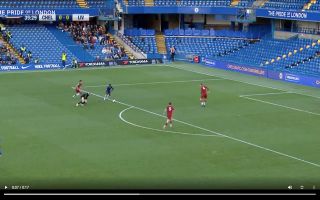 Chelsea forward Michy Batshuayi has scored a lovely lob to hand the Blues’ Under-23s side the lead against Liverpool in a youth clash this evening.

Michy Batshuayi gave Frank Lampard food for thought this evening by firing Chelsea’s Under-23s into the lead against Liverpool with a lovely finish.

The Belgian latched onto a beautiful ball over the top from Antonio Rudiger before clashing with Liverpool stopper Caoimhin Kelleher, the enigmatic star managed to get back to his feet quickly before lobbing the ball into the back of the net.

Check out Batshuayi’s goal below:

Batshuayi is out the having fun against Liverpool youths this evening.#Chelsea pic.twitter.com/vMtrLKOCLK

Chelsea have failed to win their first three games under Lampard so far and a shake-up in attack could be needed to get the Blues back to their best.

There is fierce competition for Chelsea’s No.9 spot with Olivier Giroud, Tammy Abraham and Batshuayi fighting for the chance to lead the line for the Blues.

Rudiger’s role in the goal will also excite Chelsea fans, the Blues will be eagerly anticipating the return of the Germany international to the starting lineup.