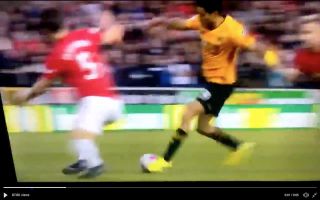 Wolves forward Raul Jimenez dazzled Harry Maguire with a sensational piece of skill in the early stages of Manchester United’s clash with the Midlands outfit tonight.

It took Raul Jimenez just seven minutes to get the better of Manchester United centre-back Harry Maguire, the Mexican star left the former Leicester star scrambling on the floor with a tidy piece of skill.

Jimenez managed to fool Maguire by sending him in the opposite direction with some lovely ball control.

Maguire sealed a marquee move to United this summer, the Sun claim that the Red Devils broke the world record fee for a defender by paying £85m for the England international’s services.

Take a look at Jimenez’s fancy footwork below:

I was thinking Maguire was gonna try and break Van Dijk's "dribble past" record until Jimenez put him down like a bad bitch in the 8th minute of week 2. pic.twitter.com/ftdNBECP6j

Check out some reaction from fans to Maguire getting beat:

That took a while……

Jimenez dusting Maguire within 8 minutes, and people compare him to VVD smh

Career over before it even started

When Harry met anyone half decent.

Jimenez sent Maguire back to Sheffield

Look at how Jimenez deleted Maguire ????

Jimenez just floored maguire. So much for £80 milllion pounds. Lol

Despite Maguire’s woes early on in the clash, the Red Devils have limited Wolves to just one shot in the entire first-half, as well as dominating with 69% possession.

Anthony Martial handed Ole Gunnar Solskjaer’s side the lead in the 27th minute with this superb finish.