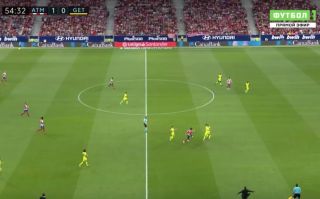 Joao Felix showed why he’s heralded as one of the world’s leading young talents yesterday, after he won a penalty for Atletico Madrid following a mazy run that saw him beat a number of players vs Getafe.

With the home side already 1-0 up, Felix decided to take the game into his own hands in the second half, as the 19-year-old went on a superb solo run that saw him beat three players, with the Portuguese teenager even throwing a nutmeg in there to boot!

This run ended in Felix winning a penalty for Los Rojiblancos, however his hard work came to nothing in the end, as Alvaro Morata ended up missing the spot kick just moments later.

Seems like Morata’s still got a bit of Chelsea in him!