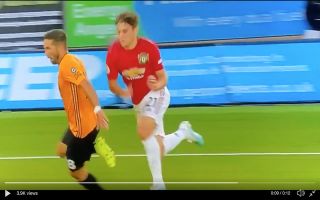 Manchester United star Dan James has been blasted by fans on social media after he was booked for diving during tonight’s clash against Wolves.

In the 24th minute of this evening’s clash, referee Jon Moss showed a yellow card to Wales international Dan James for simulation (diving).

The 21-year-old attempted to knock the ball past Wolves’ Diogo Jota before he was deemed to have dived.

Wolves fans started to heavily boo the ace before this incident as they believed that the ace was diving.

Take a look at one of James’ dives below:

James diving. Imagine if it was Salah… pic.twitter.com/in8BwoMPTx

Check out some reaction to James’ simulation from rivals fans below:

Yes we have the grip. Good controlled first half. And a poor dive from James. ?

dan james diving? disgusting @FA sort it out, can’t be having cheats ruining the beautiful game.

Dan James got away with the first dive then thinks he can dive again ? disgusting to see ?

@ManUtd @SkySportsNews do you condone your player diving like he is? Disgraceful behaviour from Daniel James, totally disgusting

Rival fans would be fuming if it were Sterling or Salah

This Manchester United fan believes that James did nothing wrong:

Daniel James first one never a dive, second one replays showed a touch on his leg it was accidental but not a dive jon moss, when he finally caught up with play, just playing to the crowd. James tracking back is excellent and he’s insanely quick #mufc

It’s nice to see that referees are beginning to be more strict when it comes to incidents of diving.

I’d expect that rivals fans have reacted so angrily to James’ actions because of the fact that some of their own players – such as Liverpool’s Mohamed Salah, have been brutally abused for diving in recent years.

All youngsters make mistakes and we hope this was just an error from Dan James, the ace will find it hard to escape criticism from rival fans if this becomes a more regular occurrence.