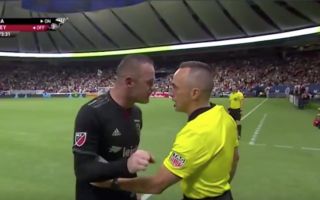 Wayne Rooney certainly wasn’t too happy with the officiating in DC United’s game against the Vancouver Whitecaps last weekend.

With his side 1-0 down in the second half, Rooney was taken off by DC with just under 20 minutes to go, with the Englishman then taking this opportunity to criticise the officiating in the match to the game’s 4th official.

As seen above, Rooney went on a rant to the 4th official during the game, with this rant containing a number of swear words in it.

Luckily for Rooney, he won’t have to put up with it for much longer given his impending switch to Derby County!