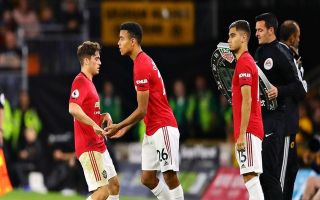 Manchester United fans will be excited to see that Mason Greenwood has scored for the Red Devils in a behind-closed-doors clash with Sheffield United.

Manchester United wonderkid Mason Greenwood is giving Ole Gunnar Solskjaer a real selection headache, the 17-year-old starlet was amongst the scorers in a behind-closed-doors clash with Premier League side Sheffield United.

The Red Devils won the secret clash 3-1, with Andreas Pereira and an ‘other kid’ scoring for United – Oli McBurnie scored the only goal for the Blades.

The Sun revealed yesterday that Solskjaer has scheduled a number of behind-closed-doors clashes for the Red Devils in a bid to get stars like Alexis Sanchez back to full fitness.

Details of the secret friendly were revealed on Reddit:

It’s pretty likely that these reports are true given that United academy graduate Ravel Morrison reunited with Paul Pogba earlier today and posted this to his Instagram:

Sanchez looks to be working his way back to full fitness, will the superstar stay at United this season or will a Old Trafford exit materialise before the European transfer window closes?

United starlet Angel Gomes was also in action which begs the question whether or not the tricky attacker was the ‘other kid’ that got on the scoresheet.

Greenwood’s goalscoring performance will hand Solskjaer with a massive boost ahead of this weekend’s clash with Crystal Palace. The Red Devils could do with another attacking option that can push some of the side’s prime stars to performing better.