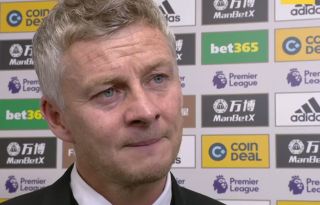 Despite Rashford stepping up and scoring from the spot in the win over Chelsea last week, Pogba ended up taking the spot-kick against Wolves on Monday evening.

MORE: Wolves do something no Premier League team has done before against Manchester United

This probably wouldn’t have been too controversial if he’d scored, but his effort was saved as the game finished 1-1 at Molineux.

Speaking afterwards, Solskjaer explained that he has too designated penalty takers and that Pogba and Rashford decide between them who’s going to take one when it’s given.

“The two of them are designated penalty shooters,” Solskjaer said.