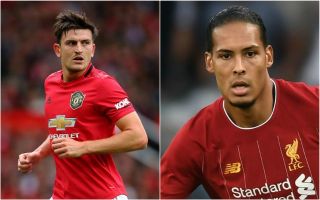 Loads of Liverpool fans are going in for Manchester United defender Harry Maguire after he was dribbled past against Wolves in last night’s Premier League clash.

We expect there’s going to be a lot of this over the season ahead, with Maguire often compared to Liverpool’s Virgil van Dijk due to moving for similarly big transfer fees.

I was thinking Maguire was gonna try and break Van Dijk's "dribble past" record until Jimenez put him down like a bad bitch in the 8th minute of week 2. pic.twitter.com/ftdNBECP6j

Van Dijk has also notably not been dribbled past for a long time, while Maguire fell over after trickery from Wolves star Raul Jimenez in just his second Man Utd appearance.

He’s now being trolled by this lot, who are taking the moment to make it perfectly clear they think Van Dijk is the far better player…

It took 65 matches before Virgil Van Dijk was dribbled past for Liverpool.

Ignore any Man Utd divvy fans mate. All about levels. Van Dijk is the best. Maguire is just a clumsy caveman.

Maguire not even close to him. pic.twitter.com/iVjXG7Vs3i

The great Maldini once said :
“If I have to make a tackle then I have already made a mistake"
Ask yourself the last time you saw Van Dijk tackle.
Debate all you want but Maguire is just Mustafi with an English name & a massive head