Sky Sports pundits Gary Neville and Jamie Carragher have had their say on the outcome of the battle for the top four in the Premier League this season.

Both expect Manchester City to win the title again, seeing off potential challenges from Liverpool and Tottenham, while it seems likely the final fourth spot will be between Manchester United, Arsenal and Chelsea, all of whom look a level below the other three.

See below as the pundits disagree over who should edge it in, with Carragher expecting Arsenal to sneak in, while Neville thinks his old club Man Utd will do enough to earn a Champions League spot. 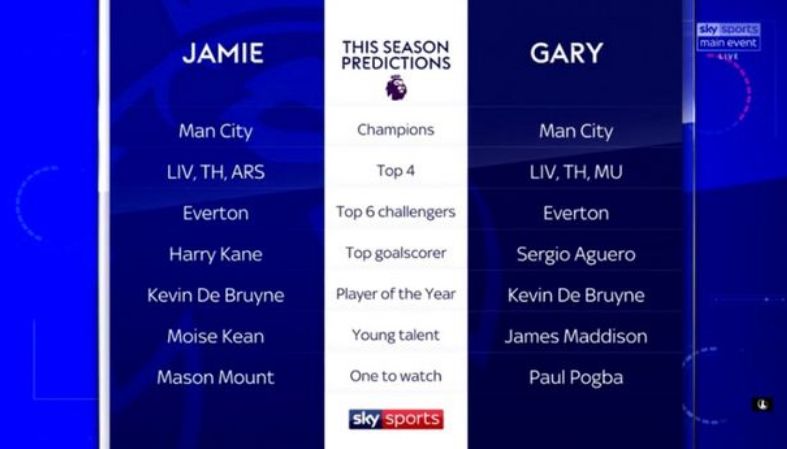 Clearly, neither have high hopes for Chelsea, who have made a poor start under inexperienced manager Frank Lampard, following a summer in which they were banned from making signings.

It does look a big ask for the Blues to break back into the Champions League places, and you can see below why the pundits made the choices they did regarding United and Arsenal.

Neville said: “I think United will get into the top four.

“Not because of what happened last week (beating Chelsea), I think United have got more options at centre-forward – Martial and Rashford.

“I think Chelsea will struggle to score goals and losing Hazard was devastating for them.”

Carragher argued: “It’s a toss up with Arsenal . It’s whoever goes furthest in the Europa League, that could cause a problem.

“If we’re talking about Manchester United having more options up front than Chelsea, yeah totally agree with that. But I actually think the fire power Arsenal have might edge Manchester United.

“I think in Lacazette and Aubameyang, that’s a proper goal threat. Probably as good as anything with two strikers.”