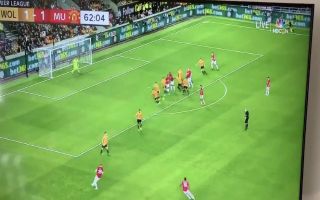 The Red Devils picked up a 1-1 draw in a Premier League clash at Molineux on Monday night, a venue which they suffered two defeats at last season, but there was a lingering sense of what might have been when the final whistle blew.

Paul Pogba missed a penalty in the second half which would surely have earned United all three points, with Rashford forced to step aside despite having netted from 12 yards the previous week against Chelsea.

Rashford also added to United’s woes himself, by attempting a Cristiano Ronaldo-style free-kick from 40 yards which trickled harmlessly wide of Rui Patricio’s post.

It was another truly embarrassing effort from the 21-year-old which suggests that Solskjaer might be wise to offer free-kick duties to Pogba instead, perhaps in a straight swap which would see Rashford inherit permanent penalty kick duties.

Check out the England forward’s embarrassing shot below, via Twitter.

Marcus Rashford is truly one of a kind. Absolutely phenomenal football. ?pic.twitter.com/UAC30vT9s4

Reports: “Ole Gunner Solskagaer has been having personal training sessions with Rashford and has been showing him videos of Cristiano Ronaldo.”