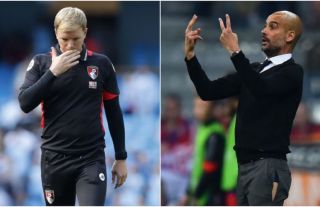 Manchester City will be hoping that they can get back to winning ways on Sunday, August 25th when they travel to the Vitality Stadium to take on Bournemouth. The Citizens could go into the game trailing Liverpool at the top of the table by five points. Football predictions on 22bet.co.uk offer their wisdom on how the match might turn out.

Pep Guardiola would have considered his City side to have been desperately unlucky not to have won their last fixture against Tottenham Hotspur. City dominated the entire game, but Spurs snatched a point after Lucas Moura scored within a minute of coming on as a substitute. Kevin De Bruyne and David Silva both missed glorious opportunities, while the Citizens also had a goal disallowed by VAR.

Gabriel Jesus thought he had won all three points after a calm finish past Hugo Lloris, but VAR disallowed the goal after the ball brushed Aymeric Laporte’s hand on the way through to the Brazilian. To say it was dubious was an understatement. Guardiola wasn’t happy with the decision and lamented City’s bad luck. But, there will be a response from the champions.

The Cherries meanwhile got their first win of the new season last time out as they travelled to Villa Park to face a newly promoted side for the second successive week. Eddie Howe’s side couldn’t have had a more perfect start, as Josh King and Harry Wilson scored in the opening 12 minutes to give them a comfortable lead.

Villa did score late, but the Cherries were able to hold on for the win. Bournemouth will be looking to improve on last season’s 14th place finish, which was their worst since their debut campaign in the top-flight. But, judging by this performance, they would definitely be in contention for a top-half finish in their fifth season in the Premier League.

Manchester City holds a dominant record over Bournemouth, as they haven’t lost to them in any of their previous 14 meetings. The Cherries have however managed to salvage a draw on two occasions, but the record doesn’t give the home side much chance. This fixture last season ended in a 1-0 win for the Citizens with Riyad Mahrez getting the only goal of the game.

Bournemouth could be on the receiving end of an all-mighty backlash from City this weekend. The champions will be angry at how they managed to let Spurs escape with a point, and they won’t be making the same mistakes again. City’s dominant record against the Cherries also highlights that Bournemouth’s chances of getting at least a point are minimal.