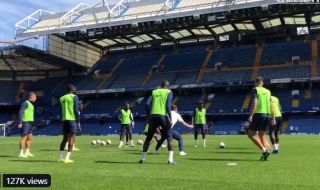 Okay that might be stretching it a little bit, but some Blues fans are calling for Lampard to be announced as player-manager, rather than just coaching the side.

That’s in response to this video clip below, in which Lampard’s closing down leads to Bakayoko losing the ball and losing his team a rondo training drill.

When you’re closing in on 20, then the boss gets a foot in! ? pic.twitter.com/Ma0riXDHc7

Would Lampard still be a better midfield option for Chelsea than Bakayoko? At the age of 41, you’d have to say probably not.

That said, he was one of the all-time Premier League greats at his peak, and only retired just over two and a half years ago.

Lampard should be both a player-coach this energy ??

Lampard should go back in the field he still got it??

Looking at our players performance, boss has to start playing soon.

too bad he ain't a player coach!chele boys

It must be like an alcoholic looking at a beer knowing he cant drink it to Lampard! The guy just wants to play!

Please can we just start Lampard ?

Still our best mid and can play Saturday