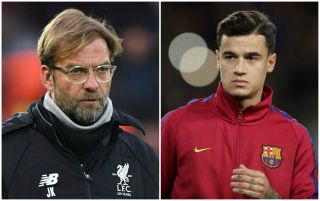 Philippe Coutinho reportedly became unsettled towards the end of his time at Liverpool before sealing his transfer to Barcelona.

The Brazil international has had a difficult time of things lately, having since ended up flopping spectacularly during his 18 months at the Nou Camp before recently joining Bayern Munich on loan.

It remains to be seen if Coutinho can get his career back on track now, and it sounds like things actually started to go wrong for him before he left Liverpool for Barcelona.

According to the Athletic, as re-reported by the Daily Star, Coutinho felt undervalued at Anfield, with Jurgen Klopp perhaps not seeing him as the star player in his side that one might expect.

In fairness, the Reds boss had other big talents like Mohamed Salah, Sadio Mane and Roberto Firmino in his ranks, while he’s since also signed Virgil van Dijk and Alisson.

There is no stand-out star in this LFC side really, and that desire from Coutinho to shine as an individual perhaps means the club were right to cash in when they did.

It’s hard to imagine the 27-year-old would fit in well with this current ethos, that has seen Klopp lead Liverpool to plenty of success in the last year or so in particular.