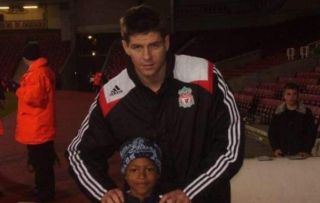 Liverpool ace Rhian Brewster has uploaded a picture of himself as a kid alongside Reds legend Steven Gerrard.

But in doing so, he gave away something else as he can be pictured wearing a jacket with a West Ham badge on it.

MORE: (Photos) Arsenal given huge boost ahead of Liverpool clash as star pictured back in training

It also seems as though this picture was taken at West Ham’s old stadium, presumably on an evening Liverpool had been visiting there.

Brewster started out in Chelsea’s youth academy before moving to Liverpool in 2014, so it’s perfectly possible that, as a Londoner, he was a West Ham fan as a kid.