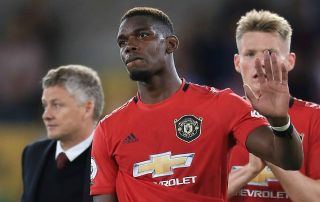 Police will reportedly assist Manchester United in trying to identify and track down the trolls who sent racist messages to Paul Pogba after the club’s 1-1 draw with Wolves on Monday night.

Pogba had a penalty saved against Wolves, leading to Man Utd only taking a point away from Molineux, and this sparked some unacceptable messages and death threats being sent the player’s way, according to the Times.

The France international has often been the subject of criticism from pundits and fans alike in his time at Old Trafford, but things now seem to have gone overboard after his failed penalty against Wolves.

The Times’ report also notes that United players such as Marcus Rashford have taken to Twitter to call on them and other social media sites to do more to clamp down on anonymous accounts sending racist messages.

It does seem far too easy to hide behind that cloak of anonymity and this has led to people behaving in ways that they’d surely know is unacceptable in every other walk of life.

It’s clear more must be done, and one hopes United and the police can track down those guilty of abusing Pogba.