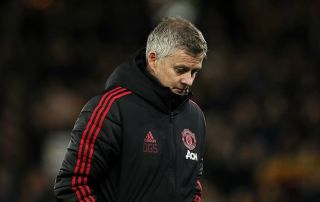 The 19-year-old joined Borussia Dortmund from Manchester City’s youth team in 2017 and has since become one of the club’s most important players. So far, Sancho has made 58 appearances for the BVB, scoring 16 goals and providing 25 assists.

Last season, the winger was sensational for Dortmund, netting 13 goals and 19 assists in 43 appearances across all competitions. He was the leading assist provider in the Bundesliga with 18 and was in the competition’s Team of the Season.

SEE MORE: ‘He is the one to watch for me’ – Neville backs Man United talisman to earn PFA Player of the Year award

Sancho has already begun this season strongly with the BVB, scoring two goals and as many assists in three matches so far. He scored and assisted in the club’s DFK-Supercup win over Bayern Munich before doing the same in their Bundesliga opener against Augsburg which ended in a 5-1 win.

Several clubs are interested in signing Sancho would cost more than £100 million with Daily Mail claiming some days back that Manchester United and Manchester City would battle it out for his signature.

PSG were also linked with the England international with Don Balon reporting that the Ligue 1 champions were willing to pay €130 million to sign him as a replacement for Neymar.

However, a recent report from the Daily Mail claims that Sancho wants to stay at Dortmund and has agreed on a new £190,000-a-week contract the club have rewarded him with.

If this report is to be true, it’ll be a massive delight for Borussia Dortmund and their fans as the 19-year-old is one of the club’s most important players. Having started the season strongly, Sancho will hope to continue his good form to help the BVB win their first Bundesliga title since 2012.