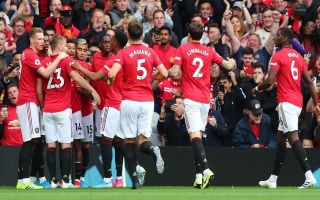 Manchester United midfielder Paul Pogba is reportedly close to committing his future to the club with a new bumper contract.

The France international has been targeted by Real Madrid but is now looking set to snub the Spanish giants and sign a new £17.3m-a-year at Man Utd, according to Don Balon.

This would be a pay rise of around £6.3m a year, says Don Balon, and will surely go down as great news at Old Trafford.

Although Pogba has had his critics in his time at United, it would be hard to replace his quality and creativity in the side without paying huge money.

The 26-year-old could no doubt have been a fine addition for a club like Real Madrid, but MUFC fans will now hope he can help fire their club back to glory.

Pogba has started the 2019/20 season well, despite missing a penalty against Wolves in Monday night’s 1-1 draw.

Don Balon claim he feels good under manager Ole Gunnar Solskjaer, who has generally lifted the mood at the club since replacing Jose Mourinho back in December.