Barcelona suffered an opening day defeat to Athletic Bilbao last week, as the Blaugrana got their La Liga season off to the worst possible start.

Barca suffered their first loss of the season in their first game at the San Mames last Friday, with a superb goal from Artiz Aduriz proving to be the difference between the two sides.

Valverde opted to start with a midfield of Alena, Roberto and De Jong against Bilbao, a decision that ended up back-firing come full time.

Barca take on Real Betis this weekend, and following their loss last week, the club are going to need to make some changes if they’re avoid another defeat.

As per the club’s official site, both Luis Suarez and Ousmane Dembele are recovering from injuries, and thus will not be playing a part against Betis on Sunday, whilst Messi seems to be close to returning from his injury if this post on his Instagram account is anything to go off.

Given this, we should expect to see the Blaugrana line-up with an attack of Messi, Griezmann and Abel Ruiz on Sunday.

Ruiz impressed massively during the club’s pre-season campaign, and it’d be nice for Barca to reward this form with a start against Betis this weekend.

Sergi Roberto put in a poor performance against Bilbao on Friday, thus we wouldn’t be surprised to see Arthur Melo replace him in midfield given that the Brazilian has recently returned to first team training.

Valverde’s side also looked lost without Sergio Busquets at their defensive midfielder, and given that Frenkie De Jong was one of the club’s best players against Bilbao, we can expect Alena to be replaced by Busquets later this week.

One could argue that Rafinha should be starting for the club given his impressive cameo display against Bilbao, however given that Ruiz is a natural attacker, we should expect to see the 19-year-old claim a starting place against Betis. 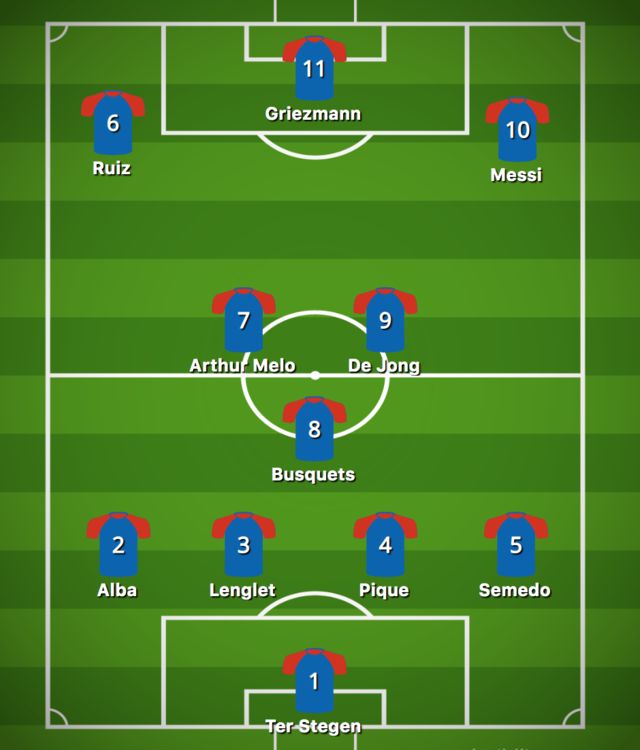