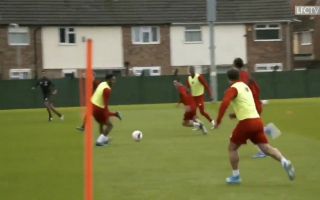 Andrew Robertson and Virgil Van Dijk linked up to great effect in a training session for Liverpool at the start of the week.

The Reds have a 100% record after three matches of the 2019-20 campaign, securing Premier League wins over Norwich and Southampton either side of a UEFA Super Cup triumph over Chelsea.

Liverpool’s front three of Roberto Firmino, Sadio Mane and Mohamed Salah will be expected to come up with the goals to fire the team towards more success as the year progresses, but there could also be some surprise contributions from the defence.

Robertson combined brilliantly with Van Dijk to score a sublime goal in a training session at Melwood on Tuesday, showing off their considerable attacking prowess which fans will now hope they can replicate on matchdays.

The two men exchanged multiple passes to cut through the defence before Robertson tapped the ball home, as Liverpool prepare for a huge home clash with Arsenal on Saturday.

That linkup between Robertson and Van Dijk ?pic.twitter.com/kuhLGGLByG