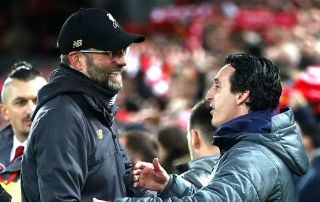 Loads of Arsenal fans have reacted badly to the news that their side will be reverting to their blue third kit for the trip to Liverpool this weekend.

The Gunners visit Anfield for Saturday’s late kick-off, with football.london among the sources stating they will debut their new third strip instead of wearing their first choice yellow away shirt.

And while this kit looks a thing of real beauty, it seems a number of Arsenal fans believe blue is bad luck for them in big games.

Some notable defeats for the club have come whilst wearing blue, such as losing their 49-game unbeaten run away to Manchester United in 2004, and then being thrashed 8-2 by the same opponents back in 2011/12.

Still, many are also pointing out that Arsenal’s last three wins away to Liverpool have come in blue, or at least not in their more traditional yellow away colours (that 2-0 win at Anfield at the start of 2012/13 was actually in a purple kit).

Why not wear the yellow? What is the point of that? 5-0 incoming..

Awful news. Arsenal in blue is always bad. But yellow at Anfield has historical significance…. https://t.co/b98g3Ivr68

Apparently were wearing the new 3rd kit on Saturday. We can’t we just wear the yellow one? We’ve worn our 3rd kits to Liverpool back to back seasons now and gotten destoryed. Liverpool 4-1 Arsenal

You can stick the 3rd kit where the sun don't shine when we play Liverpool on Saturday away from home we wear yellow not some joke kit,at least try to go onto the pitch looking like Arsenal.#Arsenal

EaCh oF ArSenaL's LaSt tHrEe WiNs aT LivErpOOl hAvE CoMe wHen wEarInG a bLue kiT.

And completely unrelated but also when Liverpool used to be shit.

Arsenal wearing the 3rd kit for Liverpool game?, Thank fuck, I was struggling to draft the excuses for losing 5-0.