Manchester United and Liverpool are ready to compete against Barcelona and Real Madrid in order to try and sign Bayer Leverkusen’s Kai Havertz.

The 20-year-old emerged as one of Europe’s brightest prospects at the Bay Arena last season, contributing 17 goals and three assists in 34 Bundesliga appearances for Leverkusen.

The German star made his international debut in September last year and has since earned three caps in total, with many fans and experts tipping the young playmaker to reach the very highest level in the coming years.

Havertz has attracted plenty of attention from top clubs with his performances, including Real Madrid, Barcelona and Bayern Munich, but they are not the only ones on his tail.

According to Sport 1, Manchester United and Liverpool are also chasing the Germany international, along with Manchester City, Chelsea and Arsenal.

The report states that Leverkusen value a prized-asset at around £91 million and Barcelona are credited with a slight edge in this particular transfer race, given the fact Havertz is a lifelong supporter of the Spanish champions. 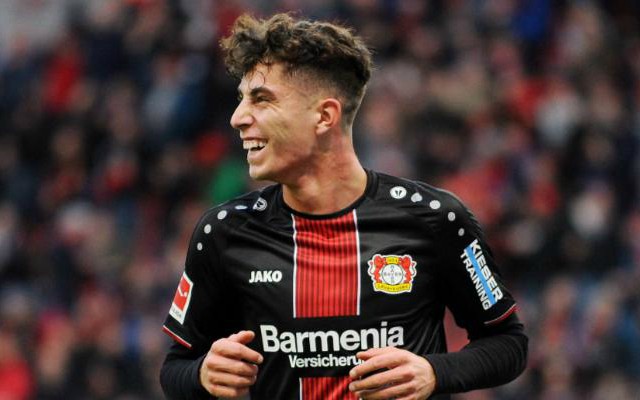 Havertz in action for Leverkusen

The Premier League quintet will be unable to submit an offer for Havertz until next year, but Barca, Madrid and Bayern still have just under two weeks left to launch a bid before the European window closes.

Leverkusen will hope to keep hold of the midfielder for the time being, however, especially since he has not yet made a final decision on his future.

Havertz is contracted to remain at the Bay Arena until 2022, but if continues on his current trajectory, a move to one of the world’s biggest clubs in the near future is inevitable.

United and Liverpool could both use a man of his talents, with the former still short of support for Paul Pogba in the middle of the park and Jurgen Klopp’s side currently lacking a creative spark in midfield.

If Havertz does not complete a transfer away from Leverkusen by the start of next month, a bidding war could well break out in 2019, but at the moment, it looks like Barcelona are in pole position to secure his services.