Manchester United are back in action this weekend as they host Crystal Palace at Old Trafford in this Saturday’s Premier League clash.

The Red Devils endured a disappointing 1-1 draw away to Wolves on Monday night, with Paul Pogba having a late penalty saved that could have delivered all three points.

MORE: Bizarre Manchester United transfer rumour may not be what it seems

Still, Man Utd were in electrifying form in their last home game as they thrashed Chelsea 4-0, so fans can be optimistic of some good quality football against Palace.

Ole Gunnar Solskjaer surely needs to make one big change, however, and drop the under-performing Jesse Lingard at last.

The England international continues to start regularly for United despite no goals or assists in his last eight games in all competitions – stats that just aren’t good enough for an attacking midfield player at a top club.

Fans will be itching to see exciting wonderkid Mason Greenwood in action, and this weekend could be a good time to give the 17-year-old his first start of the season.

Limited only to brief substitute appearances so far, Greenwood surely deserves a shot in Lingard’s rather free role in Solskjaer’s three-man attacking midfield.

See the XI we’ve gone for below, with the rest of the side unchanged from the draw with Wolves, with Daniel James keeping his place on the right flank. 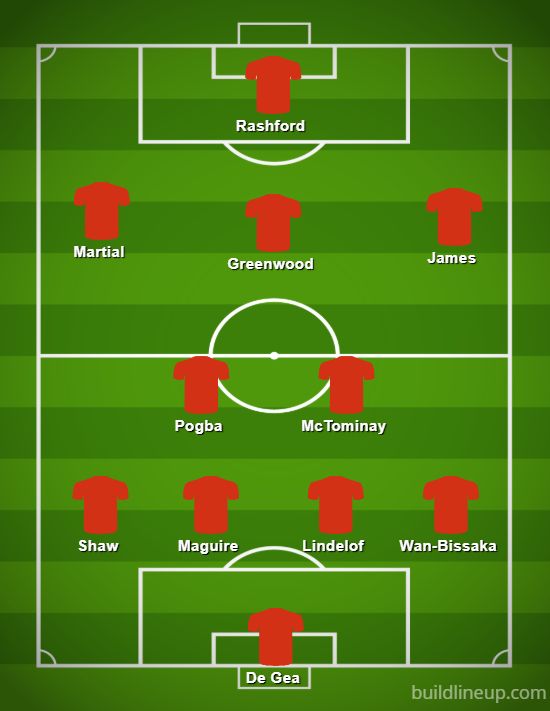 Greenwood, Martial and Rashford, however, can all move about and swap positions quite effectively, and their pace and goal threat could prove too much for Roy Hodgson’s side.

Pogba will be hoping for a strong game after his personal disappointment at Wolves, and he’d no doubt benefit from having someone like Greenwood to aim at up front.

Meanwhile, Aaron Wan-Bissaka will face the club he left in the summer for the first time since his departure and will no doubt be motivated to put in a strong performance.