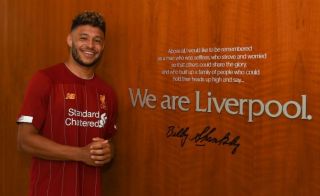 Liverpool star Alex Oxlade-Chamberlain has sent a message to the club’s fans after signing a new one-year contract extension with the Reds.

The England international has been an important part of this Liverpool squad since he joined, though he was unfortunate to be hit with a lengthy spell out injured just as he was coming into some of his finest form late on in the 2017/18 season.

Oxlade-Chamberlain has since made his comeback and the club’s official site have now announced he’s extended his deal at Anfield until 2023, with the player himself eager to make up for lost time.

Having missed a year, the 25-year-old now hopes he can make up for that lengthy absence by giving his best for another year at Liverpool.

And while he couldn’t promise LFC fans he’d always be able to produce his best in terms of quality, he has vowed never to let his effort levels drop as he seeks to help the club continue its recent success.

“I can promise the supporters that I’ll give them absolutely everything moving forward,” he said.

“There might be times where I have bad games and good games and moments where it’s not so good, but I’ll always work through those moments and give my everything to correct them and keep pushing this team forward.

“I hope that I can do some special things like I did before I got injured and, most of all, be a part of this group of players that go on to hopefully win more things.

“I’m really excited to see what the future holds for us all and I look forward to seeing them every game moving forward.”