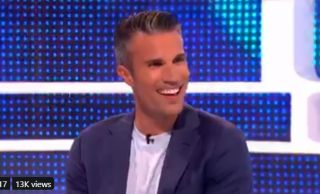 Comedian and Arsenal fan Romesh Ranganathan took the chance to say what so many Gooners must have been itching to tell Robin van Persie for years.

Watch the video clip below from A League of Their Own, as Ranganathan gives a blunt response to being introduced to Van Persie, who notably became a hate-figure among Arsenal fans for leaving for Manchester United in 2012.

Video: Comedian & Arsenal fan Romesh Ranganathan on being on the same episode of Sky’s ‘A League Of Their Own’ with former Arsenal striker Robin Van Persie. ? #afc pic.twitter.com/puEW8mdnya

Ranganathan simply tells the Dutchman: “You’re a prick mate” before joking he’ll end up leaving the show half way through to go and do A Question of Sport instead.

Van Persie recently retired from football, having had spells at Fenerbahce and Feyenoord since leaving Man Utd in 2015.