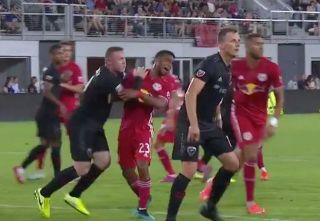 Wayne Rooney was sent off in DC United’s clash with New York Red Bulls after this dangerous forearm/elbow into the neck of Christian Casseres Jr.

The pair were battling for position in the box in the 24th minute as Rooney tried to defend a corner, but his efforts went over the line and a video review led to him receiving his marching orders.

SEE MORE: Video: Wayne Rooney goes on swear-filled RANT at MLS official after being subbed off for DC United

United went on to lose the game 2-1, and with Rooney set to leave for a switch to Derby County in January, it looks as though his time in MLS could be coming to a disappointing end.

It caps off a frustrating week for the former England international, as he was seen going on a foul-mouthed rant at an official earlier this week, as seen in the link above, while he also hit out at the travelling times involved ahead of the clash with the Red Bulls.

It appears as though his emotions got the better of him on this occasion, and he’ll now face a suspension with his side sitting in fifth place in the Eastern Conference.

Rooney has been “something else” since announcing he’s leaving. #DCU #MLS pic.twitter.com/TEB9y5yF8J