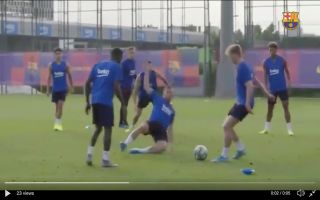 Barcelona star Frenkie De Jong dazzled teammates Arthur and Sergio Busquets with some lovely skill during training, take a look at the clip below.

Barcelona fans will love to see this clip of Frenkie De Jong tricking his midfield partners with some lovely skill during a Barcelona training session.

The former Ajax star sat Arthur Melo down with a lovely fake, one fake wasn’t enough though as the dynamic midfielder went on to trick superstar Sergio Busquets with a fake pass.

The La Liga champions have a real player on their hands.

Check out the impressive skill below:

The filth. Arthur on the ground and Busi caught by his own trick. Frenkie is adjusting just fine. pic.twitter.com/ZQTna0rXZi

Hopes are high for the Dutchman since his marquee move this summer, the midfielder joined the Catalan giants in a deal that could be worth up to €86m, according to Barcelona’s official website.

It will take time for De Jong to completely settle in, but early signs show that the 22-year-old is perfect for Barca’s style of play.