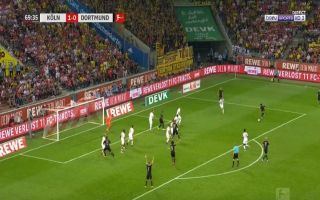 It’s now almost expected that Jadon Sancho will do something brilliant when he plays for Borussia Dortmund and tonight is no exception.

They trailed to Koln until the English star produced a piece of magic to bring his team level.

He gathers the ball at the edge of the box from a short corner and produces a fine finish across the keeper. Remarkably his goal comes from almost the exact spot where he was denied in the build up to the corner.

That’s his second goal in as many Bundesliga games this season as he looks to inspire Dortmund to a league title ahead of Borussia Dortmund.