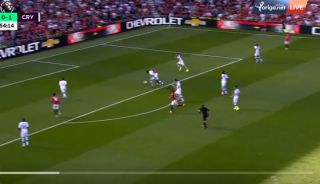 Manchester United look to have been denied a pretty obvious penalty here as neither the referee nor VAR flagged it up.

Anthony Martial can be seen racing into the box in the video below before being dragged down, preventing him from making proper contact on his attempted shot.

The Frenchman should surely have been awarded a spot kick for this, with Man Utd still 1-0 down at home to Crystal Palace.

If they go on to lose this match, they’ll surely look back at this bizarre call and rightly feel they were robbed…

Martial turns well and is dragged to the floor by Kelly in the box and nothing is given. That’s a certain penalty, what on Earth is the point of VAR?!

VAR checked the decision and still nothing was given. It was a clear penalty. https://t.co/YrfLAMGHrq