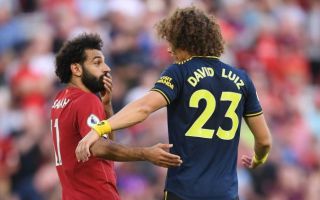 Arsenal defender David Luiz has revealed that Liverpool star Mohamed Salah told him he didn’t feel any contact when the referee gave a penalty to the Reds against the Gunners in Saturday’s match.

Salah had his shirt tugged by Luiz in the box early on in the second half, and the Egypt international went on to score from the spot and make it 2-0, with Jurgen Klopp’s men going on to finish 3-1 winners.

Still, Arsenal had started reasonably well before going 1-0 down shortly before half time, and might well have fancied themselves to come back and nick a point if not for that early second half penalty.

Speaking after the game, Luiz seemed to question the decision by explaining that even Salah seemed unsure about how strong the contact was.

By the laws of the game, however, there can surely be no question that once a shirt is pulled like that, the referee has every right to point to the spot.

“When I turned I see that I was taking and so I took off [my hand from Salah’s shirt],” the Brazilian is quoted by Arsenal’s official site.

“If I pull your shirt like that and if you put your hand like that, it’s different, the power is different. That’s what I said. In VAR it is difficult for them, they cannot see the power, so if I pull like this [gives demonstration] it’s more power than just like this.

“So it depends on the interpretation, like I said. But if you see the shirt going like that it’s also difficult for the referee to say it is not a penalty. That’s why I don’t judge him and complain against him. I’m just saying my view.