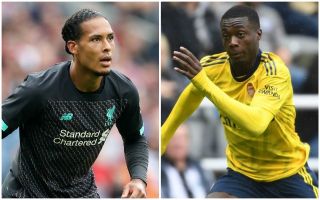 Arsenal new-boy Nicolas Pepe has shown he’s the real deal with a fine start in today’s big game away to Liverpool.

MORE: Video: Arsenal youngster scores screamer to get off the mark for loan club

That might not sound like much, but as the stat below from Opta shows, it’s not something that happens very often.

In fact, Pepe has ended a run of 50 league games in which no opponent has got past Van Dijk…

50 – Nicolas Pepe has become the first player to successfully dribble past Virgil van Dijk in the Dutch defender's last 50 appearances in the Premier League, since Mikel Merino in March 2018 for Newcastle. Beaten. pic.twitter.com/B1oRZMciOB

The Arsenal summer signing from Lille looked one of Europe’s most exciting attacking talents in Ligue 1 last season, and it seems his skill on the ball is too much even for Van Dijk, who is probably the best centre-back in the world right now.

Arsenal fans will be absolutely loving this from their marquee summer signing, though of course he now needs to follow this up with some goals for Unai Emery’s side.