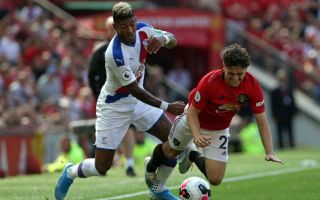 Incredibly, this marks the first time ever that the Red Devils have been beaten in a home league match with a stoppage time goal in the Premier League era.

Man Utd are known for their strong home record, particularly during the Sir Alex Ferguson era, when they were utterly dominant in the English top flight.

90 – Patrick van Aanholt has become only the second ever player to score a 90th minute winner vs Man Utd in the Premier League, after Thierry Henry with Arsenal in January 2007. Van Aanholt is the first to do so in a match at Old Trafford. Incredible. #MUNCRY pic.twitter.com/uITm70IWZV

As noted in the tweet above from Opta, it’s also pretty incredible to see it’s only the second time in the Premier League era that United have been beaten by a stoppage time winner.

On that occasion, they lost 2-1 away to Arsenal when Thierry Henry headed home at the death, though it didn’t stop them winning the Premier League title that season.

This time, however, their defeat to Palace surely gives a more bleak sign of things to come as Ole Gunnar Solskjaer’s side are brought back down to earth after that fine opening day win over Chelsea.

Many have tipped United to struggle this season and results like this show how much work there is to be done at Old Trafford.

Palace, however, deserve credit for a fine result as they grabbed a very late winner to make history and also earn an important first league win of the season for them.