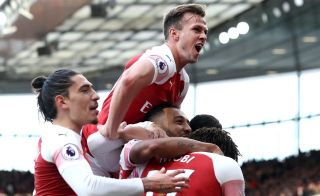 Unai Emery has received some positive news on the injury front as Arsenal defender Rob Holding completed 90 minutes for the U23s side on Friday.

The 23-year-old has been sidelined since December after damaging his cruciate ligament, and so it’s been a long and difficult process through his rehabilitation and recovery.

SEE MORE: Agent of Arsenal misfit open to exit ahead of September 2 deadline

Fortunately though, he has taken another major step towards returning for the senior side as he completed 90 minutes for the U23s in a 2-2 draw with Everton on Friday night, as seen in the tweet below.

It remains to be seen when he is given the green light from the medical staff and Emery to make his comeback for the senior XI, although it’s arguably to be expected that he’ll sit out the upcoming games against Liverpool and Tottenham.

With the international break to follow, which in turn means the next game is against Watford on September 15, that could perhaps be earmarked as a possible return date for the talented defensive ace.

Holding has made 60 appearances for Arsenal since his move from Bolton in 2016, with Emery showing a lot of faith in him through the first half of last season before he suffered his injury setback.

However, he does face competition for places now with David Luiz arriving this summer, with the Brazilian ace partnering Sokratis in the win over Burnley last weekend, while Calum Chambers got the nod alongside the Greek stalwart against Newcastle Utd in the opening fixture of the season.

With that in mind, Emery does have options in defence, but he’ll hope to find the right balance moving forward to ensure that Arsenal aren’t as porous as they were last season after conceding 51 goals in 38 Premier League games to give them the second worst defensive record of the top nine sides in the standings.

Rob Holding has handed a huge boost to #Arsenal manager Unai Emery after playing the full 90 minutes for the U23s in their 2-2 draw with Everton.

Congratulations @RobHolding95, hoping to see you in the first team very soon??? pic.twitter.com/dLqOf8fy9R